A Brief Glimpse into the Workings of Voodoo Down Records

This Friday Salt Lake will be visited by L’estasi, 12 x 12 and N’conduit, who run Voodoo Down Records, a respected label with roots in Berlin and NYC. They will be playing at SwitchSLC, hosted by Squarewave Sound and the following night at the Black Box in Denver.  Both shows will feature the house and techno sounds found on their labels with both DJ sets and two Live PA’s. They kindly agreed to answer some questions about their label as they were initially unknown to us. We spent some time listening to their tracks and realized they were hiding in plain sight. The quality of the artists they’ve worked with like La-4a, Joey Anderson, Anton Zap and the up-and-coming talent they’ve tapped into globally left us with no choice but to book them. A scan of their Resident Advisor profiles illuminates who they been playing out with and the list of countries they’ve toured, although your time would be better spend on Bandcamp listening to their tracks.

We all met going out to underground parties in Brooklyn during the late 2000s. I (Sean) met Alex at a Resolute party and we started collaborating on techno tracks together in 2009 or so. He later introduced me to Chris, another collaboration partner of his at the time, and we all clicked right away. We had all talked about launching a label at some point so when we started talking about it as a group, the idea of the mini-compilations came up and it seemed inevitable that it would finally happen. I think Chris was the one who suggested the name—we all loved Miles’ Bitches Brew album and the name comes from his really funky cut towards the end of the album.

You have a wide range of sounds represented from deep house, techno and some tracks geared towards outside the dancefloor.  What sort of ethos goes into your selection of what makes it onto the label?  (12 x 12)

Our A&R process, if you want to call it that, is pretty organic. We usually talk a lot collectively about what material we have been working on individually, or if we’ve received any interesting demos from friends or other artists. We all weigh in and the best material is usually pretty obvious so the release schedule falls into place without much debate. I think Chris, Alex and I all have a fairly well-defined idea of the label aesthetic that we like to strive for, so that informs our criteria when we decide on a new artist to sign or which tracks we like from a set of demos.

What equipment are you currently using in your live setup?  (N’conduit)

I recently ditched my laptop in favor of an Elektron Octatrack as the main sequencer/clock of my live set. I know that’s pretty in vogue at the moment, but the laptop was really killing me. Lots of dropped audio, CPU mishaps that would fuckup external clock and unexplainable bullshit voodoo Ableton glitches. So now it’s just an OT, one of the new Roland TR-08s and an 8 channel MIDI controller (all chosen to barely fit on a single covered technics 1200…if it comes to that!). The OT is pretty amazing in its flexibility and reliability (**NOTE**  live OT users with big audio files, get a fast compact flash card…at least 160 MB/s for optimum performance!) and the TR-08, for the price and size, is pretty amazing. However, my live set is still evolving and has a long way to go until I’m fully unsatisfied with whatever form it eventually takes.

How does your live setup differ from your production setup, or not?  (N’conduit)

I’m a full-time producer/sound designer so my studio is filled with a ton of expensive, cumbersome shit that I use to build sounds from the ground up (so tape machines, old Akai samplers, tube EQs, modular synths, etc). So I’m trying to go the exact opposite direction with the live set so I don’t have to worry about calibrating, maintenance, theft (all the responsibilities that come with a studio) on stage. I used to play with a real 808/606, Arp Odyssey and was constantly distracted by the prospective drunk-dude-vodka-Mountain-Dew-spill. So with the current live rig, I get to rock out without worrying about heartbreaks from broken 808s.

How has djing in Berlin for the last four years influenced how you play a dancefloor and select tunes?  (12 x 12)

Berlin has influenced my playing in lots of ways. Probably foremost, DJ sets are longer than most other cities (3+ hours), even for opening sets, so this allows you to focus more on pacing, “storytelling”, and of course buying lots more records to fill out your collection. Typically you might not know what time slot you’ll be playing until the day before the gig, and you might be playing at some ungodly hour, so this forces you to adapt to playing different points in the night and be flexible. This is actually a really valuable skill as a DJ, especially when you end up at gigs where the lineup gets shaken around at the last minute for whatever reason. The first few gigs I had upon moving to Berlin were 5 AM or 7 AM time slots, so I had to quickly learn how to carry over the energy from the height of the night and how to wind down the club at the end of the night. Lastly and maybe most obviously, Berlin spoils you with the ability to see the best DJs in the world, week in and week out, sometimes in really intimate spaces. Getting exposed to so many styles of top-notch DJing is an invaluable experience that is hard to replicate elsewhere.

Although Berlin has some of my favorite clubs and sound systems in the world, I think my favorite club to play in is Bossa Nova Civic Club in Brooklyn. It opened right around the time we launched the label and it has a really special place in the New York underground scene. It allowed a whole generation of unknown artists to make a name for themselves and has maintained a special intimate vibe that is more free and fun than clubs in the hot spots of Manhattan or Williamsburg. Add to that friendly bar staff and management, lifelong friends on the dance floor, and a top-notch fog machine in the booth!

What do you use for your live setup and how does it differ from your production setup, or not? (L’estasi)

Currently, the instrument setup is an Ebow on electric guitar, running through the space echo pedal. That audio then joins the fellow drum/synth/bass, etc. bounces all together in the Octatrack, in order to be arranged as best that I see fit on that particular night. The difficulty is paring down each song to just 8 audio tracks, along with some time shifts.  Those extra audio tracks for arrangement are a main focus of mine for recording songs.

I’ve seen pictures of you using a guitar in your live PA. Please tell us how this works and why you work with it! (L’estasi)

Yea, it’s been out live with me for the past 5 or 6 gigs. With the Ebow in hand, there are some interesting sounds that can be held in tandem with the space echo pedal’s effects. As opposed to another tabletop machine to jam alongside the OT, it’s fun to have a guitar to swing freely above & float on/off the groove of the song. I believe that it can add an extra element… back to one of the earlier ways that I would create music.

Come work the dancefloor with Voodoo Down out at Switch on Friday, Dec. 15th or in Denver at the Black Box on Saturday, Dec 16.

Matthew Daufenbach is a Salt Lake City DJ (known as Matthew Fit) and promoter who likes watching the Salt Lake house and techno scene grow. He frequently collaborates with both Squarewave Sound, New City Movement and SwitchSLC. Find him at Soundcloud.com/matthew-fit 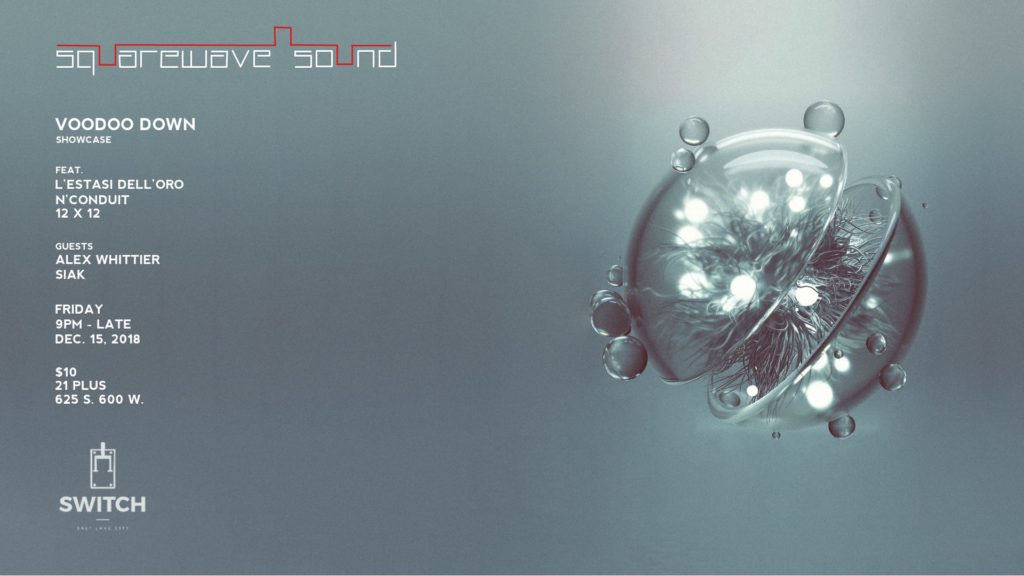